Those Who Did Not Emigrate

The family society was founded as a "mutual benefit" organization that collected funds to pay for relatives to emigrate from Lithuania and to get their established in their new countries. Although many relatives did emigrate, primarily to the United States and South Africa, and a few to what is today Israel, some relatives stayed in Lithuania.

The Russian Empire, which had seized Lithuania in 1795, lost control of the area as a result of a German offensive in the Spring of 1915, the first full year of the First World War.  In February 1918, a new country was created, the Republic of Lithuania. The country's first constitution, which was adopted in 1922, established a Western-style democracy with protections for minorities.

A military coup in 1926 set aside the constitutional government. The country's legislative body was prorogued and an autocrat, Antanas Smetona, ruled by decree. There was increasing anti-Jewish agitation and during 1930s many Lithuanian Jews sought to emigrate. By this time, however, the U.S. had severely restricted immigration and few other countries were willing to accept Jewish immigrants, with the notable exception of South Africa.

In the summer of 1940, the Soviet Union occupied Lithuania and established a Soviet-style government. All private businesses were seized and most private organizations were outlawed. About a year later, in June 1941, the Nazis pushed the Soviets out of Lithuania and within 10 weeks most Lithuanian Jews were murdered.

A few members of the family miraculously survived. Among them was Michael Savilevics, his wife, and their two sons, Sol and Boris. After the war, Michael and Sol Savilevics moved to Baltimore and, like the earlier generation of Savilevics relatives, changed their surname to Smith.  In 2008, Sol Smith's article describing his wartime experiences were in the Baltimore Jewish Times. 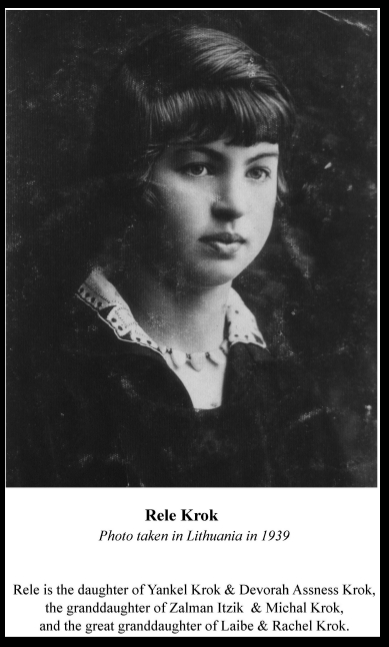 Another survivor was Rele Krok, who most likely was named for our matriarch Rella Krok.  Rele who was born in Rakisik but lived in "Shlabodke" (Viliampolė), the primarily Jewish suburb of Kaunas, which was the inter-war capital of Lithuania.

Rele became a nurse and was working at the Jewish hospital when the Germans invaded Lithuania.  She was rescued by a righteous Gentile, Juozas Stankevičius, and his family, who hid her, at great personal peril.  After the war, she moved to Israel.

Another survivor was Slava Zametas (Samet) Krukas, who managed to escape into Russia ahead of the Germans.

The following photo was taken in Rakisik / Rokiškis approximately in 1934. In the back row, from left to right, are Zalmon Krok, his wife Hinda Krok, Sima Krok Stolov, and Sima’s husband, Jochan Stolov. In the front row are Rele Krok, Devorah Grune Krok, a young boy who was Zalman and Hinda’s son, Yankel Krok, Sonia Krok Segal, and her husband. All of those in this picture except Rele were murdered in 1941.  (Many thanks to Ivan Maron for finding this photo and to Naomi Aires for forwarding it.) 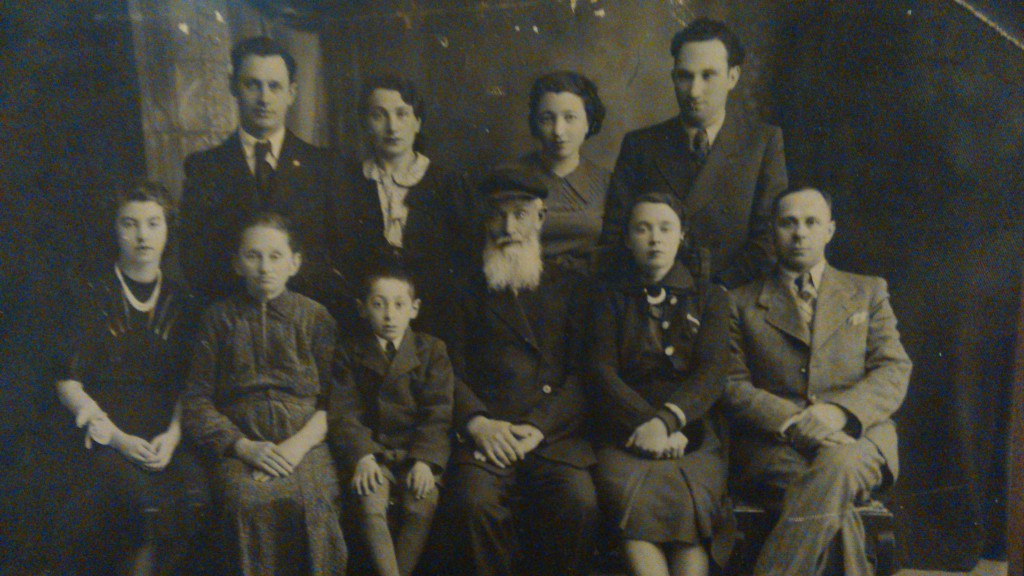