We hope to use this web site to post or provide links to a wide array of documents that would be of interest to BAYL members.   Such documents range from records held by individuals to public records.

Because Lithuania experienced war or repressive government for much of the 20th Century (1914-1991), it was long believed that pre-1914 records might not have survived.  Since Lithuania regained its independence, however, many records have come to light.  Through the good works of the volunteers with the Lithuanian special interest group ("LitvakSIG") of the International Association of Jewish Genealogy Societies, these records are being translated into English and posted on the Internet.

As an example of the translated public records, immediately below is an extract of BAYL family names that appear in a governmental record of individuals living in Rokiskis, the home of Rella Krok Romm Abramson.  As an example of an individual record, further below is a copy of a September 1938 letter from Kupiskis Rabbi Yisroel Noach Chatzkevitz to Rella's grandchildren (BAYL founder) Myer Smith and his sister Celia Smith in Baltimore.  Less than three years later, Rabbi Chatzkevitz was brutally martyred in Kupiskis, http://www.shtetlinks.jewishgen.org/kupiskis/oshry.htm.

[Example is under construction]

Example: In September (Tishrei) 1938, Rabbi Yisoel Noach Chatzkevitz of Kupiskis wrote a letter to BAYL founder Myer Smith and his sister Celia Smith Shapiro in Baltimore asking for funds on behalf of an indigent relative in Kupiskis. Following is the English translation of the letter and the comments of the translater, the able Tina Lunson. The image of the original letter is to the right (click on it to see it enlarged). 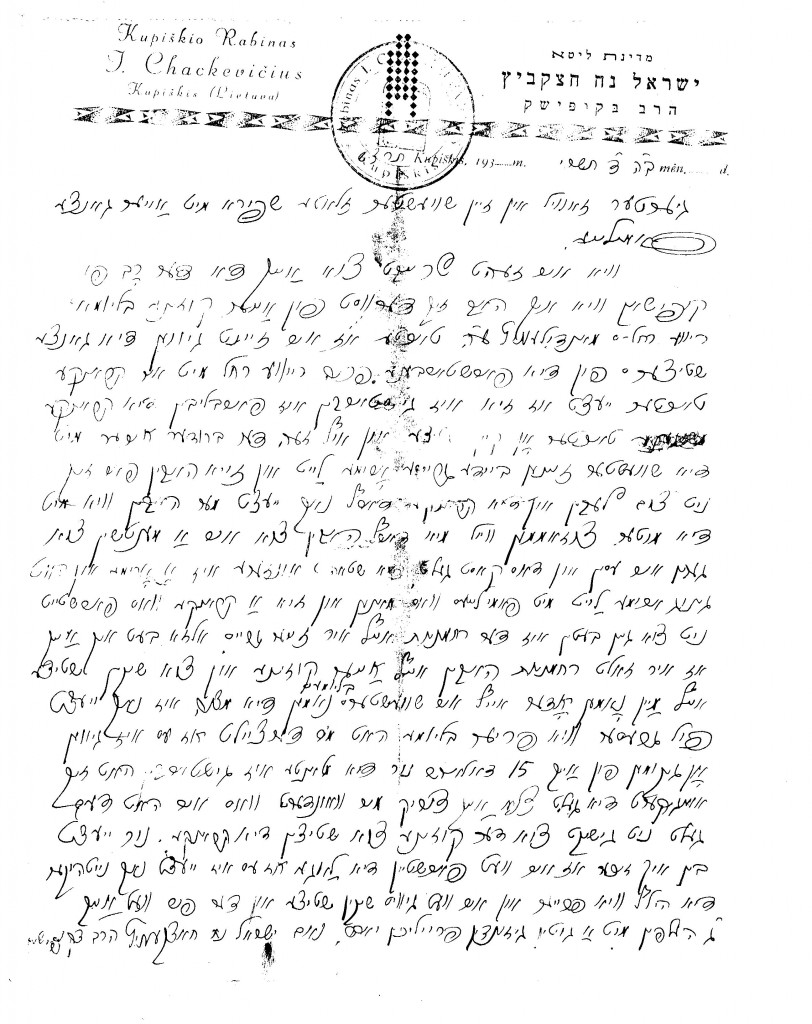 The respected Zanvil and his sister Zlate Shapiro and your entire family:

As you see, I am writing to you as the rov of Kupishok, where I learned from your cousin Bliume Rive-Rokhl’s Mandilevits may she rest in peace, daughter that you were the entire support of the deceased Mrs. Rivke-Rokhl and her sick daughter Now that she has died the sick daughter is left without [resources]. The brother ______ and the sister are both very poor indeed and have no means of livelihood. The sick daughter needs to be maintained as she was until now by the mother, so we must have someone feed her, and that costs money. Our town is poor and has enough poor people with families who demand [help], and of course she cannot go begging and everyone feels very sorry for her. I also ask you to have pity on your cousin and to send aid in my name or in your sister Bliume’s name. The mitsve is even greater now than before. Bliume told me that you sent fifteen dollars a month but since the aunt died she sent the money back to you. It is puzzling why you did not send the money to the cousin to support the sick one. But now I am certain that you will understand the situation as it is now more urgent to help than before, and that you will surely send aid, and therefore may G” will help you with good, healthy and happy year. From Yisroel Neyekh Khatskevits ha’rov d’kupishok.

(Translated from Yiddish by Tina Lunson)

This very interesting letter from R" Yisroel Neyekh* Khatskevits, the Rov of Kupishok, is addressed to "Zanvil and his sister Zlate Shapiro and their whole family". He writes about the "cousin Bliume* Rive-Rokhel's Mendilevits may she rest in peace" who has died and left orphaned children. As the addressees were the sole support of the family before, the Rov writes to ask that they please continue to send support, since the children have no other. The situation in Kupishok is pretty grim in general.

R" Khatskevits writes in a fine style and explains the situation carefully. He is clearly acquainted with the family and concerned about the children. . . .

Click here to go to listings of the those buried in the cemetery in Rosedale, MD, on the east side of Baltimore. BAYL members are listed with "Congregation or Burial Society" designated as "Anshe Neisin, new". These records also list full name, date of death, age, and location of plot.